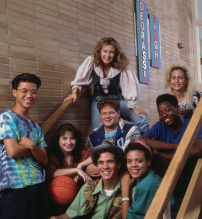 Multimedia campus opened its doors in 1994

Touted as the express on-ramp to the “information superhighway,” Centennial’s Information Design Centre in East York was the most technologically advanced school in Canada when it opened its doors in September 1994, complete with the latest fibre-optic network and hub provided by Bell Canada. Ironically, the press kit handed out at the time contained a 3.5-inch floppy disc. The $33-million campus was renamed as the Bell Centre for Creative Communications at its official opening in March 1995 with a digital network that could carry data at a blazing 155 Mbps (megabits per second). It was advanced technology at the time, but most homes today use faster connections. In addition to the network – which rivalled the CBC Broadcast Centre for speed and bandwidth in 1995 – Centennial brought together some remarkable partners to support its interactive, multimedia training centre. Silicon Graphics Canada provided more than 100 Indy workstations and an Onyx supercomputer to facilitate digital animation renderings (coincidentally, the world’s first feature-length digital animation movie, Toy Story, debuted in 1995). Toronto’s Alias Research contributed its Maya software used in Hollywood to create the digital special effects seen in The Mask and Jurassic Park. Sony supplied the professional audio and visual equipment used in the Centre’s radio and television production facilities. The Bell Centre was originally built in 1955 as the Toronto Teachers’ College. Centennial College acquired the property in 1979 and repurposed the building as the East York Campus. The College closed it in 1989 to facilitate extensive renovations – but not before allowing “Degrassi High” to film on location. The quadrangle remains an exquisite example of the architecture of Peter Dickinson, who designed several signature buildings in Toronto through the 1950s and early 1960s. The campus was renamed The Centre for Creative Communications in 2001 after Bell Canada took back the name and affixed it to Montreal’s new hockey arena