An Avid Cyclist Sets The Pace As Centennial’s Leader 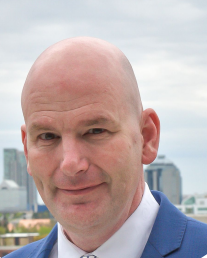 When Centennial College sought its seventh president to supersede Ann Buller, its longest-serving chief executive, the College cast the net far and wide, attracting a slate of outstanding candidates from across Canada. Ultimately it would choose from within, elevating a dynamic leader who also happens to be a snappy dresser.

I’ve been experimenting with colours, which make us feel good about ourselves,” explains Dr. Craig Stephenson, showing off a floral tie and a vivid blue suit that pops on a dull winter’s day. “Coming from Britain, you were expected to wear the clothes that fit the gravity of the position. But you have to have some creativity – and refuse to be cast into any one particular way of acting or thinking.

With a Ph.D. in the Social History of Medicine and a Masters in Higher Education, Craig has three decades of postsecondary experience spanning two continents, three countries, and seven institutions. He has operated at progressive levels of leadership in fields ranging from academic research and teaching to international education, enrolment strategy and student affairs. A recipient of the Excellence in Service to Students Award from Eleanor Roosevelt College at the University of California, a Teaching Fellow from the University of Cumbria in England and a Board of Governors’ Award of Excellence from Centennial College, Craig has never failed to impact the institutions he serves.

While he assumed the presidency last fall, Craig is no stranger to the rigors of the academic year or the demands of Centennial’s highly diverse population, which includes some 14,000 international students. He had joined the College in 2008 as Centennial’s inaugural Dean of Students.

“The position was similar to what I had been doing in institutions elsewhere. I enjoy student contact and wanted to replicate the U.K. experience in Canada,” he says of his goal to build a first-class student advising and success system at Centennial. Funny thing is, Craig had planned to resume his work at a university when he landed in Toronto with his newlywed partner, Parna, a Canadian who practices law. He hadn’t anticipated joining Ontario’s college system, which was uncharted territory for him. “A former Centennial colleague, Jennifer Leith, told me that I would fall in love with the institution – and that’s exactly what happened,” he smiles. “You hear students say their lives were truly transformed by their experiences at Centennial. That resonated with me.” Centennial’s mission to transform lives and communities aligns with Craig’s own philosophy. Born into a working-class family living in northern England, he was the first in his family to attend a postsecondary school. Despite earning exceptional grades, he was advised to “aim low,” dissuaded from applying to the best universities. Craig went on to earn a first-class honours degree in history at Warwick University in Coventry, after having overcome a strong sense of not belonging.