Music With No Boundaries: With Adekunle Olorundare 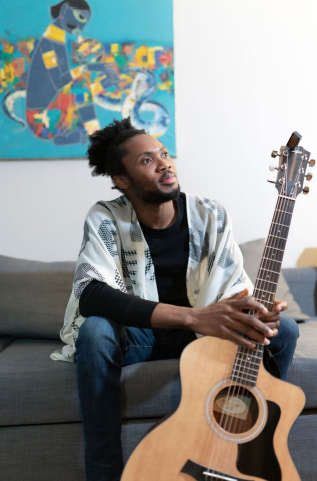 Adekunle Olorundare, or Kunle as he’s known to family, friends and fans, sits in his downtown Toronto apartment surrounded by instruments and recording equipment. His living space is dominated by evidence of music making, an outward expression of his love of songs and sounds. “I find music in everything,” he says. “I’ll be releasing a song soon where the percussion is actually me tapping on the kitchen table.” It was Kunle’s desire to make a career out of creating music that brought him to Canada in 2014, specifically to attend Centennial’s Music Industry Arts and Performance program. Realizing that he’d need to learn the business language of music to be successful as a working artist, he chose Centennial’s program because it offered an ideal balance between creative development and practical industry knowledge. “It’s one of the few programs that allows students to explore anything and everything,” he says. “You can work with all different kinds of genres and instruments, and in your third year you can choose to go into either production and technology or business. I’m constantly using the skills I developed there in new and unexpected ways.” Growing up in Nigeria, Kunle absorbed his father’s vast musical tastes. “My upbringing was full of music through my dad, who has a huge collection of records,” he says. “Rock, jazz, pop, folk, country; he listened to everything. I remember pretending to have malaria just so I could stay home and listen to music.” Those broad influences are reflected in Kunle’s music today, which he calls “music with no boundaries.” Bridging contemporary folk and soul with oral history traditions from his West African roots, Kunle mesmerizes audiences with acoustic guitar, warm vocals and a unique selection of sounds from different cultures.

His career started taking off even before he’d graduated from Centennial. “I actually missed graduation because I got booked to play a show in Ghana,” he says. “I guess you could call that being productive!” The show in Ghana, where he has returned several times to perform, felt like a homecoming to Kunle. He considers it his adopted country, having moved there for work after earning his engineering degree in Nigeria. And it was in Ghana that he realized music was his true path. He left engineering and worked there as a full-time artist before deciding to pursue a formal education in music at Centennial. The Music Industry Arts and Performance program is based at Centennial’s Story Arts Centre and offers an advanced three-year diploma with a six-week field placement in the third year. Students benefit from private lessons with professional musicians, ensemble groups and the opportunity to explore a wide range of instruments and interests. With a focus on equipping students with the knowledge and skills they need to navigate the business side of the music industry, the program also offers a business stream that provides hands-on, real-world experience. Uniquely, a focus on Indigenous musical traditions is woven throughout the curriculum, being taught alongside courses like Live Sound Engineering and Worlds of Music.

Nate Horowitz, Dean of the School of Communications, Media, Arts and Design, says a commitment to Indigenous histories, sounds and songwriting was part of the program’s fabric from day one.

When we developed the performing arts program [including Music Industry Arts and Performance], we decided early on to ensure Indigenous perspectives were strongly represented,” he says. “It’s working incredibly well with the international music emphasized in the curriculum.

Horowitz says the diversity of Centennial’s performing arts program offerings and its student body are what make for such a rich learning experience. “Everyone brings their story with them,” he says. “It creates a great sense of fusion in the collaborative work students do here.”

It was that diversity and the opportunity to explore his vast musical interests that motivated Kunle to make the most of his time at Centennial. “I was really invested in the school and was constantly reaching out to the teachers,” he says. “When you’re hungry to achieve your goals, you’ll put everything into it.” His focus has paid off. Since graduating, Kunle has become a regular fixture of Toronto’s music scene, playing in local venues for audiences with tastes as diverse as the music he creates. He’s also toured Europe several times and had an opportunity to perform in his dream venue in Ghana, backed by a string quartet. His future is looking bright. But Kunle’s journey hasn’t been without its challenges. As a newcomer to Canada and a person of colour, he has experienced discrimination from some corners of the music industry. “As an immigrant, there are so many barriers you have to break through,” he says. “And there’s a structure in place that’s not super supportive of people of colour. It’s unspoken, but it’s there.” Kunle’s optimistic outlook and belief in music as a uniting force are what keep him moving forward. “There is discrimination, but I don’t care,” he says. “Music brings people together and there are so many things to be grateful for.” As he looks ahead to what’s next, Kunle is focused on continuing to break down barriers through his music and bring his art to everbroader audiences. Asked what advice he would offer to others hoping to pursue a career as a musician, Kunle doesn’t hesitate.