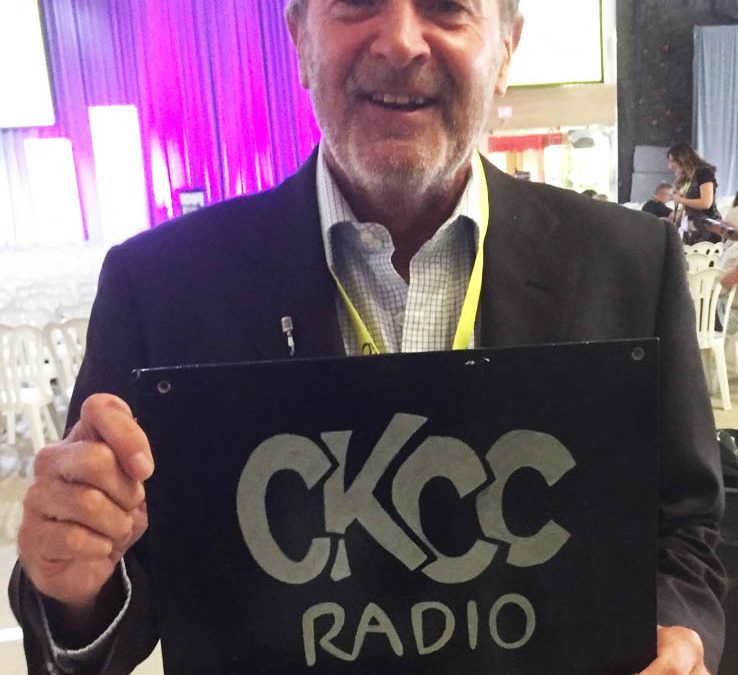 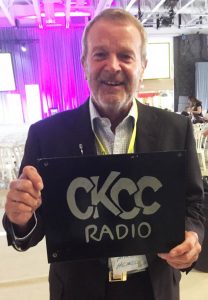 When graduate Mike Heindl came across the black CKCC Radio sign he had squirreled away in his basement, he knew it needed to be preserved for posterity’s sake, so he brought it to Centennial’s Progress Campus to be sealed in a time capsule.

“CKCC was a closed-circuit student radio station that we ran at Warden Woods Campus. Students would listen to it in the campus lounges and cafeteria, and we used a Bell cable to carry the music to Ashtonbee Campus, too,” Heindl remembers. Later, the Progress and East York campuses were added to the network.

Heindl managed the station in 1968 while he was enrolled in Centennial’s Communications program, which was a mix of broadcasting and corporate communications. The station did not have a CRTC broadcast licence, so the music content was limited to Centennial’s campuses.

Each volunteer got to program one hour of music per week. Heindl spun Top 40 hits, while others featured country music, experimental FM programming (which was just starting out), and one woman featured French music and dialogue. There were even local news reports at the top of each hour.

“We had some pretty good equipment, so I tried to run it as a professional operation. Craig Smith, who ran CKCC before me, went on to work in production for CFRB and CKFM, so we knew we were on the right track,” says Heindl. In one instance, he recalls having to discipline an on-air personality for salty language.

“Swearing wasn’t allowed on the air – and still isn’t today. I had to let one guy go, and I even attended a disciplinary hearing to defend our standards.” When he graduated from Centennial in 1970, Heindl was hired by a small-market radio station in Guelph, Ontario.

“I was paid $70 a week for being on air. But I had heard that disc jockeys working at weddings and parties were making almost as much for one night of work!” Heindl tried the party circuit and discovered he had a knack for bringing good tunes to energize the crowds. By 1971 he had established his own business, Spectrum of Sound, and by 1975 it was a full-time operation employing several DJs.

“The 1970s and ‘80s were a great time for parties. Lots of companies had holiday events and a good DJ would ensure their guests would get out of their chairs and dance the night away,” says Heindl. Growing awareness of drinking and driving – and the liabilities associated with liquor consumption – reduced the number of corporate events (and what was served) in subsequent years.

At 67 years of age, Heindl has witnessed a lot of change in the business, but he managed to weather it all. Instead of spinning records, his vast music collection today resides on a hard drive. He handpicks the events he wants to work at, which frequently includes his alma mater where he hosts special events for Centennial’s faculty and staff.

“I provide what I call ‘The voice of God’ to get people’s attention and keep things moving along. We have some fun, too,” he smiles. Heindl credits Centennial for teaching the skills that gave him his start in both broadcasting and as a business owner running a professional DJ service.

Slipping the timeworn CKCC sign into the college’s time capsule last month was a small gesture towards preserving that legacy.